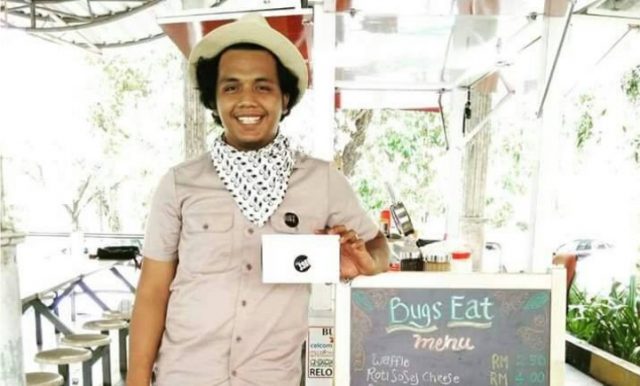 Ever wonder to run a business while studying? As the majority of students is concentrating on courses and club activities, Muslim has had an idea to run a food stall at Latar Siswa, which is within the area of Faculty of Modern Languages and Communication, Universiti Putra Malaysia (UPM). His food stall, Bugs Eat, selling various food and snacks, has made Latar Siswa an ideal place for students chatting and relaxing, while enjoying their meals. 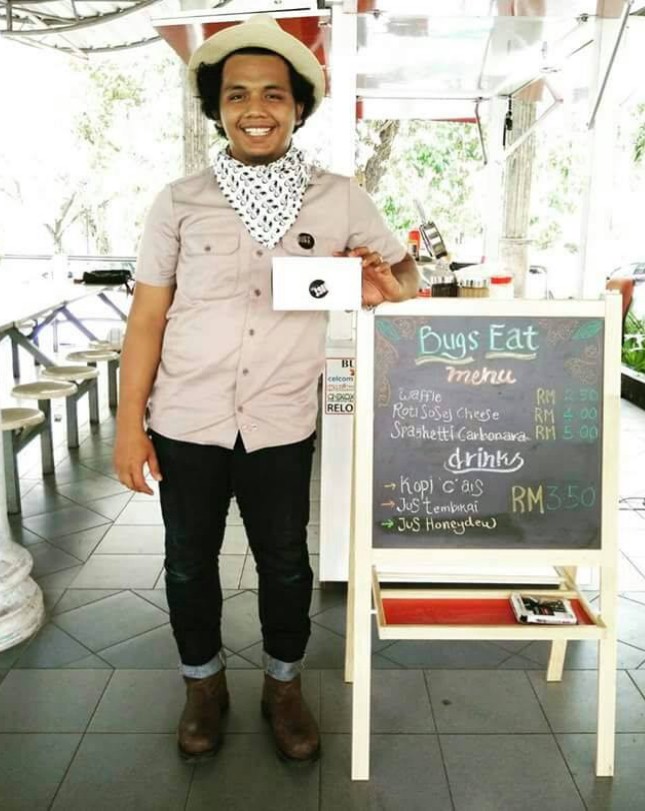 Ahmad Muslim Awang (Muslim), 24, standing beside menu chalkboard in front of his stall.

Bugs Eat was established in 2015, as a platform for Muslim to learn doing business, while he was attending classes for his bachelor in the faculty. Latar Siswa had once been a deserted open area with only few facilities, such as beverage vending machine, tables and chairs. However, with the support of Centre for Entrepreneurial Development and Graduate Marketability (CEM) and the permission of the faculty management, the place had been livened up since then.

The setup of Bugs Eat was based on RM500 modal, and the first selling product was waffle, which produced with rent machines. After about one semester, the profit earned was enough to invest in selling more choices of products, such as carbonara spaghetti, milk tea, hotdog and so on. The area of the stall was also enlarged after the renovation with recycled materials. “Using whatever I could get to embellish this place with a sense of vintage,” said Muslim, “recycling them in this way also helps cutting cost as well as prevents wasting.” 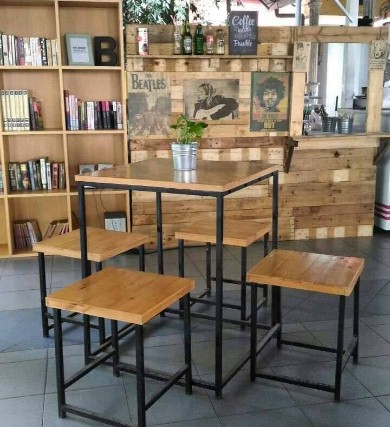 Old furniture, books and posters used to decorate the surrounding of Bugs Eat.

Born in a family with own business, Muslim had intense interest in the same field. He thought that university students need to earn pocket money themselves, as well as reduce the burden of family. Although the amount could not compare to the incomes of parents, his mother was delighted when Muslim, as the first child who, brought money back to his family while still studying. It was a token of thanks giving, because Muslim felt that expressing gratitude to parents was a very important value.

Job opportunities for other students

Establishing own food stall not only earning income for himself, but also provided chances for other UPM students as well. Whoever willing to earn was welcomed to join his team to assist running the business. Instead of outsiders, Muslim, who intended to help students, preferred students to join the team, and they could take turn in managing the stall while attending classes. Eat Bugs, as he said, was also a model for other university students, motivating them to learn about entrepreneur-ship while studying. 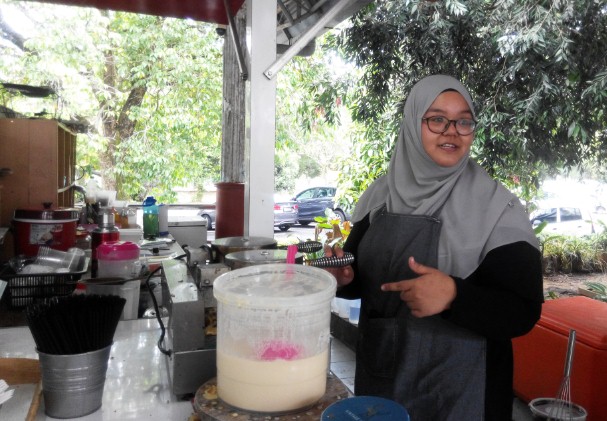 One of the students, who joined Muslim’s team, taking order of a customer

To run a business in long term, Muslim shared that self-discipline was significant in finance and time management. “The business would fail due to lack of discipline,” told Muslim, “because we would think we have a lot to spend.” Therefore, the input and output of finance needed to be planned properly, to maintain the business. Time management, was another concern as a student, to balance his time to study and work.

Preparation for the future

Running a business has a lot to learn about. Handling criticism helped Muslim to improve his business in terms of hygiene and the quality of food. Also, he liked to observe other entrepreneurs and the way they run the business successfully. Through his observation, some Chinese did not close their shop during certain holiday, in order to boost the sales. Learning through these aspects was a stage of preparation for Muslim, who readied to involved himself in the field of business in the future. Economic downturn today was depressing, yet, instead of blaming the government or others, Muslim shared that people should do something for themselves to achieve a better life. 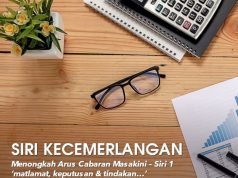 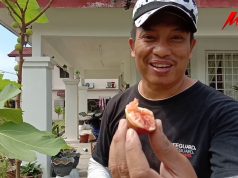 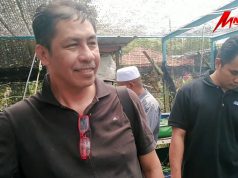